Since 1895, the Army & Air Force Exchange Service has gone where Warfighters and their families go to provide quality, tax-free merchandise and goods and services military communities need - regardless of location, risk or challenge.

The Department of Defense’s largest retailer, the Exchange is governed by a Board of Directors responsible to the Secretaries of the Army and Air Force.

The Exchange is fully aligned with the Army, Air Force and Space Force. A force multiplier for Soldiers, Airmen, Guardians and military communities, the Exchange improves military readiness, recruiting and retention.

The Exchange is the 54th-largest retailer in the U.S., achieving competitive earnings of 5% of sales in 2021. 100% of Exchange earnings support our military community. In the last 10 years, the Exchange benefit has provided $3.5 billion in earnings for critical military Quality-of-Life programs such as outfitting more than 712,000 Warfighters at cost annually, providing school meal support for Department of Defense Education Activity facilities overseas and delivering needed services to locations impacted by natural disasters.

The Exchange self-funds its operations budget through customer revenues, except for 3% of its funding, which is paid from appropriated funds for expenses such as the transportation of merchandise by sea, incremental costs incurred in support of contingency operations and military personnel assigned to the Exchange.

The Exchange operates more than 4,330 facilities with operations in more than 30 countries, 50 states and four U.S. territories. No matter where troops go, the Exchange goes with them. The Exchange serves troops in Southwest Asia, Africa, Europe and the Pacific.

The Exchange supports Warfighters at the tip of the spear, bringing products, services and a taste of home to remote locations and war zones where traditional retailers can’t operate. Since 9/11, more than 4,900 Exchange associates have deployed to serve in conflict situations.

The Exchange has hired more than 54,000 Veterans and military spouses since 2013, with a goal of hiring 75,000 heroes by 2026. Hiring our heroes is a Quality-of-Life force multiplier.

The Exchange gives spouses first consideration for open positions, and the continuity program lets military spouses transfer to an Exchange when their family has a permanent change of station. For military families, an Exchange career means benefit retention, retirement opportunity and stability.

For more on careers with the Exchange, visit ApplyMyExchange.com. 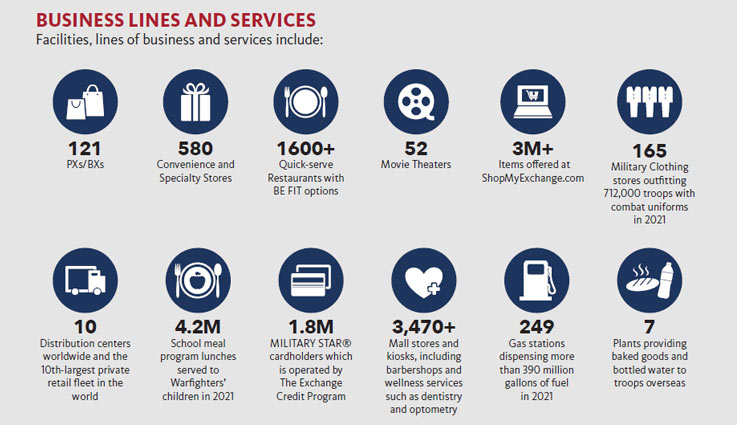 The Exchange Credit Program offers affordable credit to the military community. Established by Congress in 1979 to protect service members from predatory lending, the credit program operates the MILITARY STAR® card for 1.8 million cardholders and manages a $2.1 billion credit card receivables portfolio. Benefits include one of the lowest flat interest rates in the country among store cards, free shipping on online purchases and acceptance at all military exchanges and commissaries and online at ShopMyExchange.com, MyNavyExchange.com and ShopCGX.com.