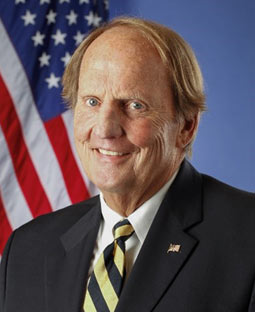 Tom Lozier is the Executive Vice President and Chief Administrative Officer (CAO) for the Army & Air Force Exchange Service (Exchange), at the organization’s headquarters in Dallas.

A native of Jackson, Michigan, Lozier has 35 years of retail industry experience. He received his Bachelor of Science in 1974 from the United States Naval Academy at Annapolis, Maryland. He graduated from Harvard Business School in 1982, where he earned a Master of Business Administration.

Prior to joining the Exchange, Lozier was an independent business consultant engaged in several projects, including the launch of Loehmann's Stores’ e-commerce fulfillment center. He was also the Senior Vice President of Operations for Finlay Fine Jewelry Corp. in New York, where he was responsible for store support operations, logistics and merchandise distribution, asset protection, product services, store displays, and other sales support activities.

Lozier was also the owner and President of Warden West Corp., a company providing third-party logistics support to Macy's West, Broadway, Emporium Capwell and Bloomingdale's in the western United States. Prior to Warden West, Lozier worked as a Divisional Vice President for Lazarus, a division of Federated Stores. There, he successfully led the consolidation of the distribution functions and installation of state-of-the-art merchandise processing systems. Lozier began his Exchange career when he was named Vice President of Logistics in late 2012. He was promoted to Senior Vice President of Supply Chain Transportation in 2014 and to his current role as the CAO in March 2020. Lozier was an active duty and reserve officer in the U.S. Navy Supply Corps for more than 20 years. At one point during his naval career, he served as Planning Officer for the Navy Exchange Command. He was awarded the Meritorious Service Medal by the Chief of Naval Operations and retired as a Captain.