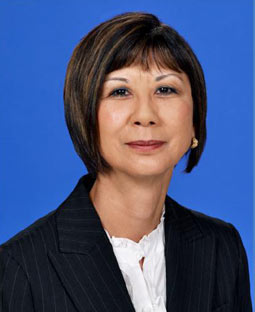 Karen Stack is the Executive Vice President & the Chief Logistics Officer for the Army & Air Force Exchange Service (Exchange) at its headquarters in Dallas, Texas.

Stack oversees global distribution and transportation operations, including 11 distribution centers and the 11th-largest private retail fleet in the U.S. She is also responsible for logistics in Contingency Operations, providing essential support and a lifeline to America for Warfighters deployed to remote and austere locations worldwide. Stack is also the Executive Champion for Able, Believe, Lead, Empower (ABLE), the Exchange’s disabilities employment awareness Special Emphasis Program.

Stack received her Bachelor of Science from the University of the State of New York. She also holds a Master of Science in Human Resources and Business from Amberton University in Garland, Texas, graduating in May 1998.

Stack has deployed to Dhahran, Saudi Arabia for Operations Desert Shield and Desert Storm. As Europe/Africa/SW Asia SVP, she oversaw contingency operations in 30 countries and coordinated Exchange support for Operations Iraqi Freedom and Enduring Freedom. Her team's efforts earned the Exchange the Army's Meritorious Unit Commendation, recognizing their support for more than 300,000 troops.