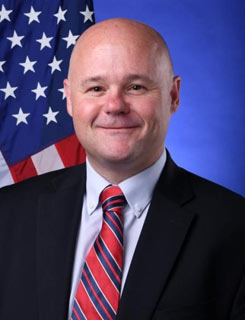 The Exchange is a non-appropriated fund entity of the Department of Defense. Established in 1895, the Exchange is the 61st largest retail organization in the U.S. With annual revenues of $8.6 billion, the Exchange employs approximately 35,000 associates, including military personnel. In 2019, the Exchange produced $369 million in earnings, all reinvested into the military community.

Rosenberg’s 31-year career with the Exchange has enabled him to gain vast experience in the military resale market. He holds a bachelor’s degree in Business Management and a Master of Business Administration in Strategic Leadership from Amberton University; he is fluent in German.

An “Army brat” born at Landstuhl Army Medical Center in Germany, Rosenberg began working for the Exchange as a summer hire custodial worker in Zweibrücken, Germany, in 1989. He has been honored and privileged to serve the Best Customers in the World ever since.

In 2004, Rosenberg deployed in support of Operation Iraqi Freedom, where he was directly responsible for establishing and operating numerous retail, food and services facilities in Taji, Iraq, in support of U.S. troops.

Rosenberg returned stateside as Main Store Manager at Fort Bragg, N.C. His next assignment was as the General Manager at Fort Lee, Va., and later Fort Jackson and Shaw AFB, S.C. He served as Main Store Manager at the Kaiserslautern Military Community Center mall at Ramstein, Germany, then as the Area Manager for Hawaii-Alaska-Kwajalein. In 2014, Rosenberg returned to Germany as Area Manager, and in June, he was promoted to Vice President for Europe & SW Asia. In May 2017, he was promoted to Senior Vice President of the Europe and SW Asia Region. He assumed his current role in July 2020.

Rosenberg’s performance over his career has earned him seven Excellence Awards, nine Superior Accomplishment Awards and two Thanks Elite awards. In 2016, he was awarded the Exchange Extraordinary Achievement Award.