The Exchange Was There in WWI 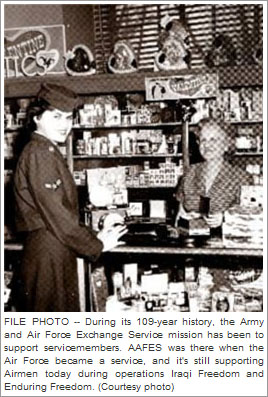 With the birthday cake in place and candles lit, Regina Koenig and a few other Army & Air Force Exchange Service employees sang “Happy Birthday” to a 21-year-old colleague at Bagram Air Base, Afghanistan.

Halfway through the song, a 127 mm rocket exploded on the other side of the main store.

As the service business manager, Mrs. Koenig knew the rocket had hit near the beauty shop, which was one of her vendors. She feared for her employees’ safety.

While everybody else scrambled for cover, unsure if another rocket would hit, Mrs. Koenig raced toward the ruckus.

When she turned a corner, she couldn’t see a thing. Dust had blotted out the sun. All she could hear were the screams of injured Soldiers. Confusion reigned. Shards of glass littered the site. Blood was everywhere.

After checking on two employees and a customer, all of whom were OK, her memory went blank. The June 16 attack had killed three Soldiers and injured 23 servicemembers and civilians. Two months later, the Army recognized Mrs. Koenig, along with three other Exchange employees, as heroes.

To this day, Mrs. Koenig said she doesn’t like to make a big deal about her hero status. She is more proud of having the store open just four hours after the explosion.

“We may not have had much, but it was enough to make our customers happy,” she said.

During its 109-year history, the Exchange’s mission has been to follow servicemembers no matter where they go - even if that means working in harm’s way.

The War Department issued General Order 46 in July 1895 that directed commanders to establish exchanges at every post as practicable. Old black-and-white photographs depict some of the first employees selling goods from tents. After the Army Exchange Service supported World War I and World War II, it was redesignated the Army & Air Force Exchange Service in July 1948. Since then, it has been involved in every major conflict, including those in Iraq and Afghanistan. In keeping with the Exchange credo of “We Go Where You Go,” employees operate from old, bombed-out buildings, truck beds and even from aircraft.

Another similarity with the past is the challenge of getting merchandise to remote areas. The Exchange lost $6 million in the last sixth months, primarily because of convoy ambushes and hijackings. Getting merchandise in-theater isn’t only challenging, it can be deadly. Although there hasn’t been a U.S. death associated with the movement of merchandise in Iraq - because most convoy drivers are contractors from other countries - there have been a number of contractors injured or killed.

Despite the danger, employees continue to occasionally convoy to remote outposts to organize “rodeos” where employees sell merchandise off truck tailgates and from the back of aircraft so that troops can at least buy the essentials - like toiletries, socks and underwear. They do this only when an outpost has no base or post exchange.

“You won’t find a workforce more committed to the troops than our volunteers who deploy in-theater,” the general said. “They are willing to put themselves at risk to take care of Soldiers and Airmen downrange. It’s a phenomenal story of commitment and courage, and it’s unprecedented.”

A large part of the Exchange’s mission takes place during an Airman’s time off.

“We’re doing the best we can to make an awful environment a little more pleasant for the troops,” General Frost said.

When the war with Iraq first started, the Exchange had an exchange operational before the fall of Baghdad. It moved into place so quickly, employees used quarters to rub the imprint from credit cards at some locations because they didn’t have credit card machines.

Today, base and post exchanges in-theater carry everything from DVD players to laptop computers. Commercial cargo planes fly in magazines, CDs and DVDs so patrons can buy the same merchandise as their counterparts in the United States - not outdated material.

Soldiers and Airmen can even get pedicures, manicures and massages at some camps - amenities many stateside bases don’t offer.

“We bring them the services they are accustomed to at home,” said Anthony King, Manas store manager in Kyrgyzstan. “Increased morale equates to better protection for our country.”

When customers are happy, so are store employees, General Frost said. She said store associates in Iraq don’t talk about sales, they talk about smiles.

It’s nice to come here and discover the real reason why the Exchange was founded,” Mr. King said. “Everybody appreciates you out here.

Mr. King said he enjoys his job so much he volunteered to serve in-theater longer than the standard six months. He spent two months in Saudi Arabia, seven months in Kuwait and then moved to his current job at Manas. When he returns home, he’ll have spent two years deployed in the war zone.

In stateside shoppettes, base exchanges and gas stations, store employees don’t get the chance to interact with customers on a personal level. In Iraq and Afghanistan, many Exchange volunteers say that barrier crumbles to nothing. They know their patrons - their names, the names of their family members, their likes and dislikes.

“The Exchange associates say they are truly thanked every day,” said Chief Master Sgt. Dale Myers, enlisted adviser for General Frost. “They get a sense of accomplishment. They also get to see what their customers do during times of war, and they gain a better appreciation for the military.”

The general said many volunteers extend or return to the harsh conditions endured in war zones. “They thrive in those environments,” she said. “They learn to lead, and they come back better people.

After spending six months deployed, she says she would do it again. Employees receive a bonus of 10 to 25 percent of their pay when they volunteer to serve at locations supporting operations Enduring Freedom or Iraqi Freedom.

“We’re not there just for the (increase in pay),” Mrs. Koenig said. “We’re there for the Soldiers. We have no weapons to protect ourselves, but we still go.”